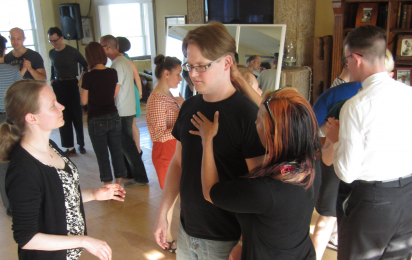 The Guest Mentor Program offers veteran higher-level participants who capture the spirit and methodology of The Experiment an opportunity to serve as a mentor to another week (in addition to their own week as a participant). The primary role of Guest Mentors is to help moderate small group exercises and mentor newer participants on how things work and how to be successful within The Experiment’s format. Only participants of the current year (after being accepted through the standard application process) are eligible to be offered the role of Guest Mentor to another week that same year, with the exception of the highest-level week where a few Special Guest Mentors are invited to fill this role.

The Fellowship Program serves to recognize those who, through exceptional vision, initiative, and effort, have made extraordinary contributions in helping to build, support, and advance The Experiment and its values. In many cases those contributions included helping to define the roles through which they have functioned, and which often had to be fashioned specifically for the unique format and environment of The Experiment.

Out of many who serve in roles such as Guest Mentors or on support staff, only the most extraordinary will earn the distinction of Fellowship status. While most Fellowship titles correspond directly to such staff roles, the title of Honorary Fellow can be awarded to those outside of staff who have made similar contributions either to The Experiment or in the broader dance scene based on the values of The Experiment (for example local practice/development programs).